An explanation for a leading aspect of the aging process – and how to reverse it.

Due to overwhelming scientific evidence, the telomere theory of aging has risen to prominence over the last four decades. In a nutshell, it attributes the aging process to the shortening of our telomeres on a cellular level. Telomeres are the caps at the ends of our chromosomes. As we age, our cells divide in order to replace cells that are constantly being lost due to injury, sickness and unavoidable wear and tare. With each cell division, our telomeres get shorter. Once the telomere ends are below a certain length, the cell ceases to divide any further in order to avoid damaging the DNA. This process effectively creates an aging clock – one that ticks with every cell division until these divisions stop.

Telomeres protect your DNA. When they shorten and fray, gene expression suffers – and cells can no longer do their job. Damaged telomeres are connected to premature aging, a weakening of the immune system, lower bone density, and a higher potential for cellular mutations such as cancer. Other related ailments include diabetes, heart disease and Alzheimer’s.

Telomerase is an enzyme that rebuilds, restores and repairs your telomeres. It was discovered in 1984 by American research scientists Elizabeth Blackburn, Carol Greider and Jack Szostak, who were subsequently awarded the 2009 Nobel Prize in Physiology or Medicine. Our cells have the ability to make telomerase, but its production ceases early in our life cycle. Since the discovery of telomerase, researchers have been searching for a way to activate its production in adult cells.

After decades of research, the quest for the fountain of youth is finally over. The root of the astralagus plant contains very small concentrations of a powerful molecule that has been proven to activate telomerase production in adult cells. This miraculous anti-aging molecule is called Cycloastragenol, and it is the active ingredient in TELOSTEP.

Premium Grade - tested twice for purity, & produced in accordance with the highest standards.

TELOSTEP is a relatively expensive supplement because it is so difficult and costly to produce. A saponin with up to 30 times more bioavailability than Astragaloside IV, our pure Cycloastragenol needs to be separated from the Astragaloside IV molecule – which is extracted from vast quantities of a rare species of astragalus.

Each capsule is protected with our easy-to-swallow digestive coating, which is specially formulated to resist stomach acid and deliver the maximum amount of Cycloastragenol to your DNA.

If you decide on TELOSTEP therapy, you’ll never want to stop. A long-term strategy for longevity, TELOSTEP can and should be viewed as preventative medicine – the benefits of which can only be witnessed over a long period of time. There is a very real correlation between longer telomeres and longer life, not to mention improvements in vision, mental clarity, memory, skin and complexion, sexual performance, and overall vitality. TELOSTEP perfectly complements any lifestyle, diet, fitness program, or regime of supplements and herbal tonics, and is part of the holistic approach that we at the Academy of Healing Nutrition have been actively educating people in for over 30 years.

Keep your Telostep supply stocked by joining our subscription service with an easy low monthly automatic payment or other purchase options.

Discover your Telomeres! They are a major factor in how long you live, how quickly you age, and when you die. Bad things happen when telomeres get short.

Listen to Rex and Roger explaining this discovery and how scientists have figured out a way to lengthen telomeres. Telomeres repair and protect your DNA, they are the end caps of your chromosomes. When they shorten and fray, cells can no longer do their job.
WATCH HERE 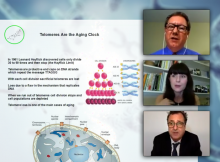 The Science behind Telomeres, Telomerase and Cycloastragenol

In 1961 Leonard Hayflick discovered that nearly every cell in the body can only divide 30 to 90 times before cell division stops, called the “Hayflick limit”. Cells in the body are constantly lost due to injury, sickness and just unavoidable wear and tear and need to be replaced via cell division. Once this limit is hit cells of a specific type in a specific region of the body can be lacking, leading to muscles being weaker, organs not functioning as well, tissues being less flexible and generally the body being more aged. This is one of the main causes of aging.